Never Give Up – Never Surrender 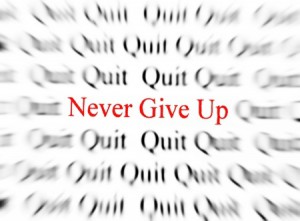 I love that line from the movie Galaxy Quest.

I was always one of those people who hated marketing and selling because I thought that marketing is manipulative or sleazy and I would think that I was forcing people to do business with me.  That is until I started to talk to people and found out that most of my competitors had no clue what they were doing.  I realized that I was the best power washer around and most likely, so are you!

So, if we have the best product and we do the best job aren’t we are doing our prospects a total disservice by not convincing them to use us?  Think about this, they are going to buy from someone and if it’s not you or me it might be the first splash and dasher that comes along who winds-up doing a crappy job.

So you LOST the job to a UN-qit!  That is UN-qualified, UN-insured, UN-trained.  WOW!  I hope that one hit you as hard as it hit me.  Believe me I used to give up real easy when I was talking to prospects and where did it get me, no where!  I would drive by the prospects house later only to see they had someone else do the job and it was done poorly at that.

Have faith in yourself and Never Give-up, Never Surrender!

Your cart is empty

Subtotal
Shipping and discount codes are added at checkout.
Checkout